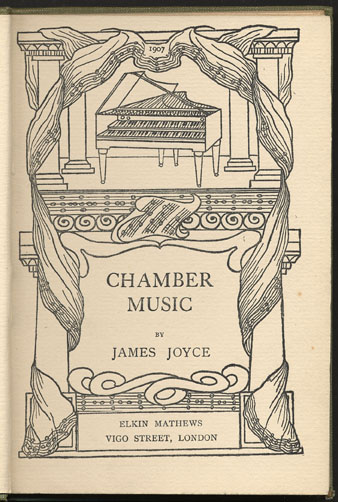 Collection of poetry, published in May, 1907, shortly after Joyce’s return to Trieste from Rome.

Joyce was uncertain whether to publish his early poems and was apparently convinced by Stanislaus in a long, peripatetic discussion around Piazza delle Poste

After the publication of Chamber Music, Joyce continued to write occasional poems, some of which have Triestine settings (‘Watching the Needleboats at San Sabba’, ‘On the Beach at Fontana’) or refer to events which occurred during this period. A number of these poems (‘A Flower Given to my Daughter’ and ‘Nightpiece’) are clearly related to Giacomo Joyce or to his relationship with Nora (‘Tutto è sciolto’ and ‘She Weeps Over Rahoon’), while ‘Nightpiece’ would also have a role in the genesis of Finnegans Wake. These poems were collected in 1927 as Pomes Penyeach. 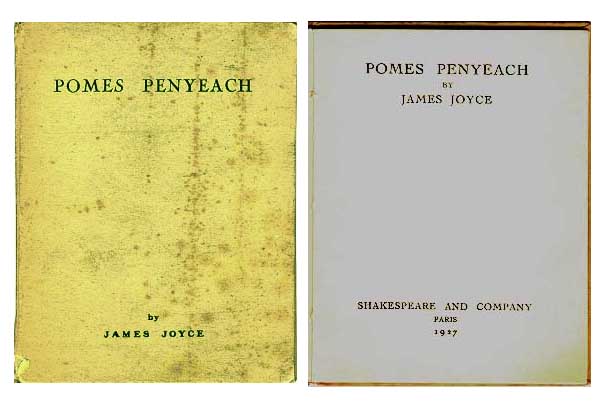 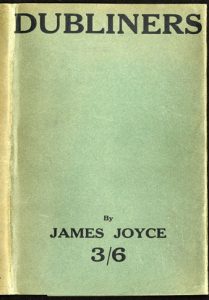 Joyce’s attempts to publish Dubliners would span almost his entire stay in Trieste.

The Irish writer’s decade-long ‘odyssey’ is reconstructed in the Chronology section, however we can note that the first contract with Grant Richard dates from early 1906 and the final story, ‘The Dead’ was completed by October 1907, but between broken contracts, countless refusals by publishers and the destruction of the first edition in 1912, the book would not appear until June, 1914. With the exception of some clear borrowings, such as the name of Sinico given to two characters in ‘A Painful Case’, the influence of Trieste on these stories seems to be minimal and oblique.

Portrait of the Artist as a Young Man

When Joyce arrived in Trieste in 1904 he had already written 12 chapters of his novel Stephen Hero, begun earlier that year.

On September 8, 1907, increasingly dissatisfied with the novel’s form, he told Stanislaus that he would rewrite it in 5 chapters after finishing his short story ‘The Dead”

By the end of November he had rewritten the first chapters of Stephen Hero as Chapter 1 of the Portrait, by March of 1908 he had finished the 2nd Chapter and by April he had given the 3rd Chapter to Stanislaus to read. At this point, the revision of Stephen Hero seems to have stopped, in part because of the difficulties of presenting Stephen’s development after the sermon episode, and in part because of Joyce’s financial difficulties and frustration with writing which led him to consider other options for making money. 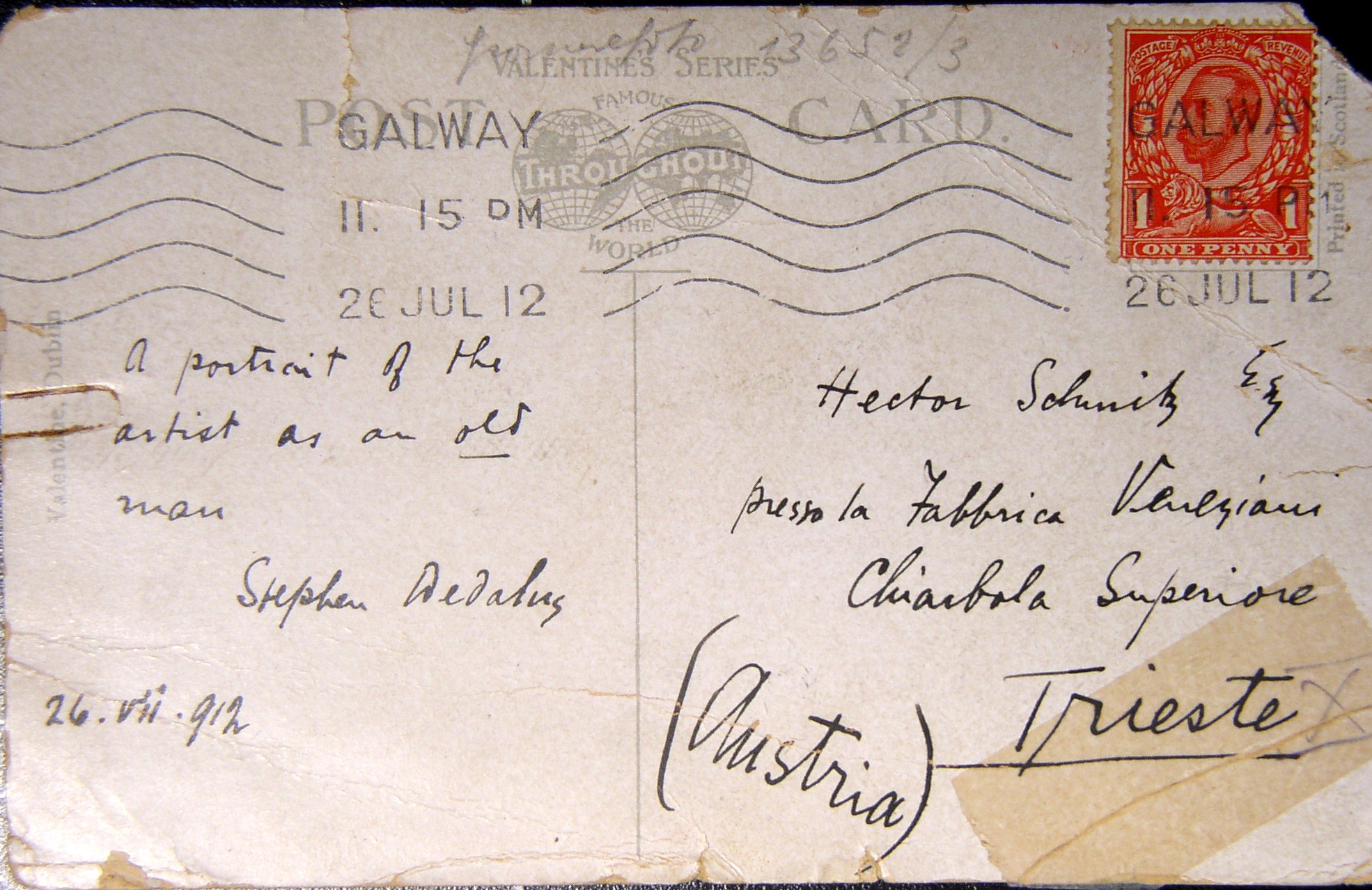 In February, 1909 Italo Svevo wrote Joyce a letter containing his criticism of the first 3 Chapters. In February 1911, Joyce’s frustration was such that he threw the manuscript of Portrait into the fire. Fortunately his sister Eileen intervened and saved the manuscript. In August 1912, Joyce wrote to Nora telling her that the publisher Roberts had asked him to finish his novel and that if Dubliners was published he would ‘plunge into my novel and finish it’, indicating that he had not made any significant progress in over 4 years. The turning-point was Joyce’s discovery by the American poet Ezra Pound, who first wrote him in December 1913 asking if he could publish one of his poems in an anthology he was preparing with Yeats. In January, 1914 Joyce sent him the first chapters of Portrait, which Pound pronounced ‘damn fine stuff’, and within a few weeks the Portrait began appearing in serial form in the English journal The Egoist.

In March of the same year, Joyce finally signed a contract with Grant Richards for Dubliners (it would be published in June) and these two events seem to have driven him to finish Portrait during 1914. In fact, the influence of Trieste can be most clearly seen in the last two chapters of Portrait, which reveal some interesting correspondences with Giacomo Joyce, both in terms of content (the presentation of the ‘beloved’, the references to Dowland, etc.) and stylistically (the staccato, ‘journal’ style of the final pages), suggesting that Joyce had drawn on Giacomo in order to finally complete a novel that he had been working on for ten years. 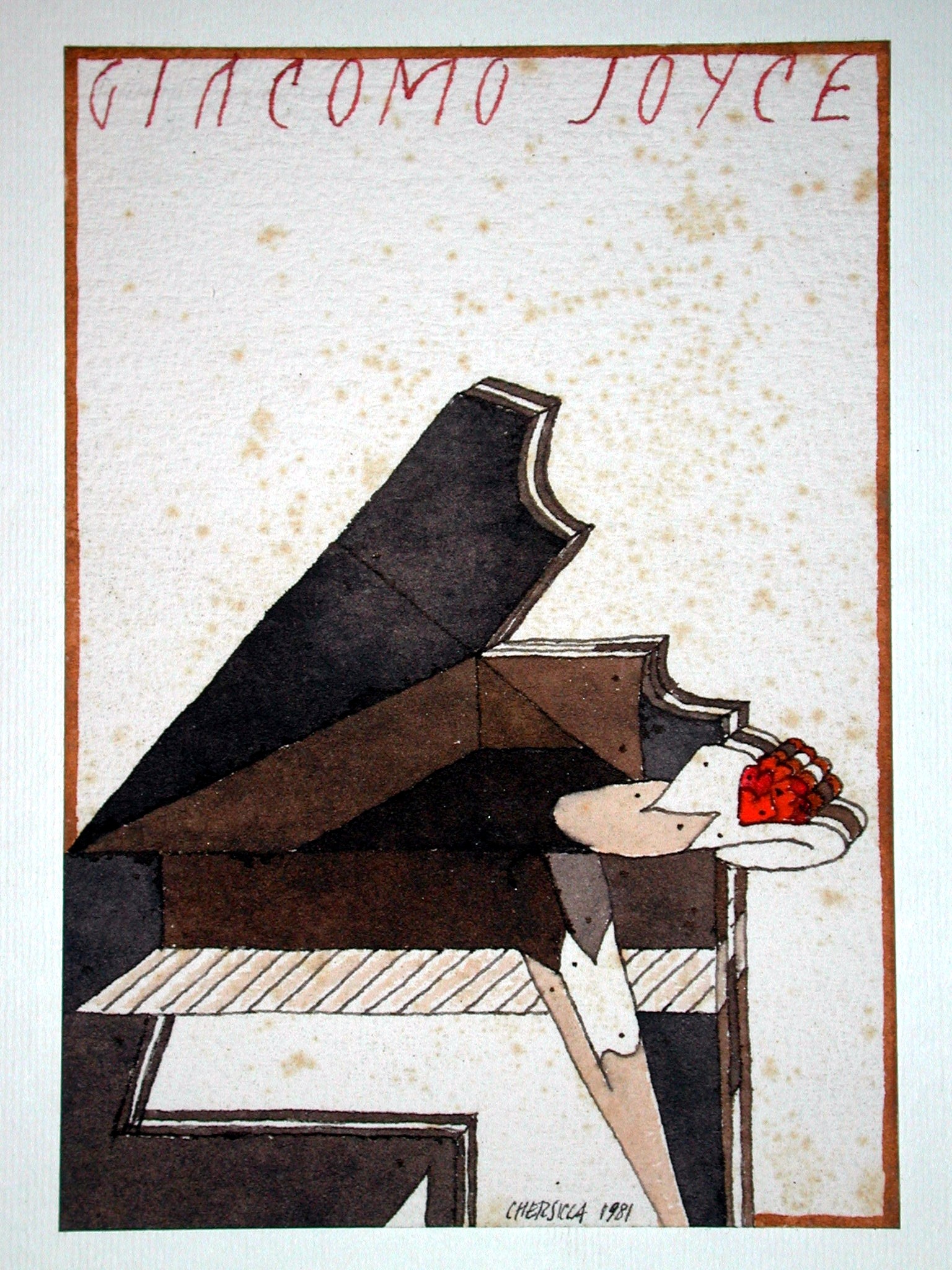 Giacomo Joyce remains the most enigmatic of Joyce’s texts.

With the exception of some poems, Giacomo is the only work by Joyce set explicitly in Trieste and due to its inherent contradictions and allusiveness, it presents notable problems for textual analysis

For example, we still do not know the date of composition (presumably between 1912-14), the young female student it was based upon (Amalia Popper, Emma Cuzzi? someone unknown? or, what is most likely, a composite of several persons), Joyce’s intentions (is this a final text? Was it preparatory to a more extensive work or the distillation of a longer work of prose which no longer survives? Was Joyce intending to return to this text at some later date?), the exact interrelation of the various segments and the concept of the text as a whole (was it modelled upon some external source such as Dante’s Vita Nuova or Shakespeare’s Sonnets? Is there some sort of coding in the text?).

The manuscript would remain with Stanislaus after Joyce’s departure from Trieste in 1920 and only became known after Ellmann included portions in the first edition of his biography of Joyce. Stanislaus’ widow gave the text to Ellmann as a gift but due to Ellmann’s scruples regarding the person he considered to be the prime model, Amalia Popper, the text was not published until after her death in 1967.

In any case, Giacomo marks a clear turning-point in Joyce’s writing, both in terms of style and approach and Joyce would return to it often in later years, incorporating many of the individual segments in his other writings, especially in the last two chapters of Portrait, in the ‘Proteus’, ‘Scylla and Charybdis’ and ‘Circe’ episodes of Ulysses and even in Finnegans Wake, though in a much more indirect manner. 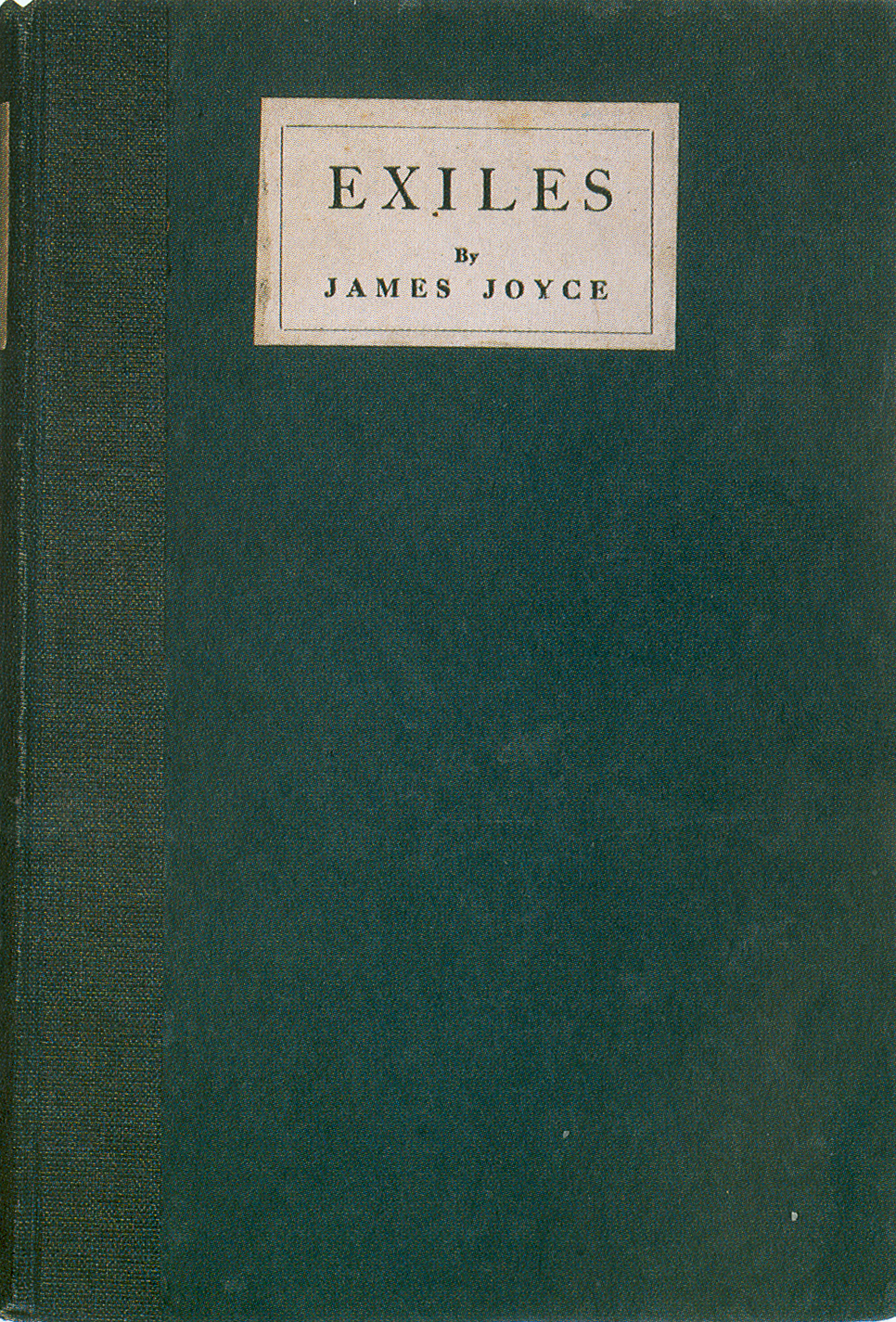 As the name applies, Exiles is about the consequences of living away from one’s homeland and origins and, as such, can be clearly related to Joyce’s situation after nearly a decade in Trieste.

The play was probably begun in late-1913, possibly after Joyce put an end to Prezioso’s ‘courting’ of his wife, and written during 1914; Joyce would tell his agent Pinker that the play was finished in April, 1915.

However, the ‘exile’ of the title also refers to the distance between people, in this case a complicated quadrilateral involving two couples, and introduces the theme of adultery as an insoluble, all-consuming and permanent aspect of the human condition.

Exiles is thus also an important transitional text in Joyce’s movement towards the themes that would dominate Ulysses (once again: exile and adultery) and though the treatment and approach are very different, it probably provided Joyce with the final preparation and focus he needed in order to begin his masterpiece. 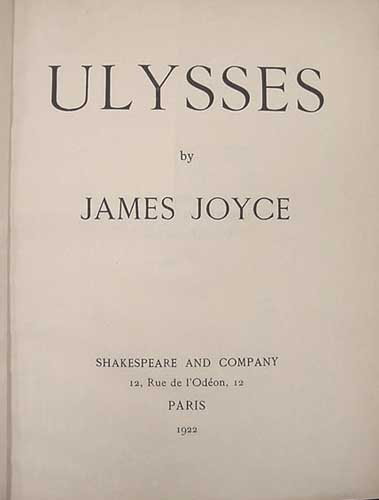 The genesis, concept and structure of Ulysses are unimaginable without Trieste.

For Ulysses, while ostensibly about Dublin, is in reality a tale of two cities in which the second city, Trieste, is mentioned only once explicitly, in the ‘Eumeus’ episode. 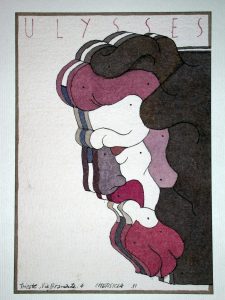 In Ulysses there is a continuous and complex doubling of persona, settings and events, in which elements, persons and experiences which Joyce encountered in Trieste are overlaid upon or appear as counterpoint to his meticulous and seemingly direct re-creation of Dublin. Some of these elements are quite evident, from the protagonist, Leopold Bloom, a converted diaspora Jew of Central European origins whose name is most likely the composite of two Triestine business partners, Leopoldo Popper and Adolf Blum, to elements which Joyce first encountered or came to know more fully in Trieste: psychoanalysis, Futurism, opera, a very particular expression of Judaism, Orientalism, and so forth.

Others are very specific, obscure: the name of a soap or a hat, specific words and allusions, while still others are very subtle and circumstantial and more difficult to demonstrate: the distinctly Triestine elements of contamination, corruption (especially linguistic) and hybridisation, and perhaps most importantly, the issues of identity, belief and history.

Ulysses is the epic of Dublin as seen through the eyes of someone who had lived for 10 years in Trieste and its dynamic and structure owe much to the alternation and juxtaposition of the pre- and post-Triestine Joyce, of Stephen Dedalus and Leopold Bloom who view the world from their radically different perspectives, and in which the events of Joyce’s life are contextualised in Dublin, but often receive their meaning and resonance thanks to Trieste.

Between 1907-1912, Joyce wrote 9 articles for the local paper, Il Piccolo della Sera. All these articles concerned Irish topics, from the first article of March 22, 1907 ‘Fenianism: The Last Fenian’ on the death of John O’Leary, to the article on Home Rule in May of the same year, the articles on Oscar Wilde, written for the Trieste premiere of Strauss’ Salomè in 1909 and the banning of George Bernard Shaw’s ‘The Shewing-Up of Blanco Posnet’, to the final two articles written by Joyce during his stay in Galway in 1912.

These articles are of considerable interest as they reflect Joyce’s changing and often ambivalent attitudes towards his native country. Joyce also attempted to write other articles for Il Piccolo della Sera and other Italian papers (on the Dublin Exhibition n 1907, interviews with Caruso and Marconi in 1909 and 1912). In 1914, Joyce tried to interest the Italian publisher Formìggioni in a collection of his articles under the title ‘Ireland at the Bar’, but nothing ever came of this project. 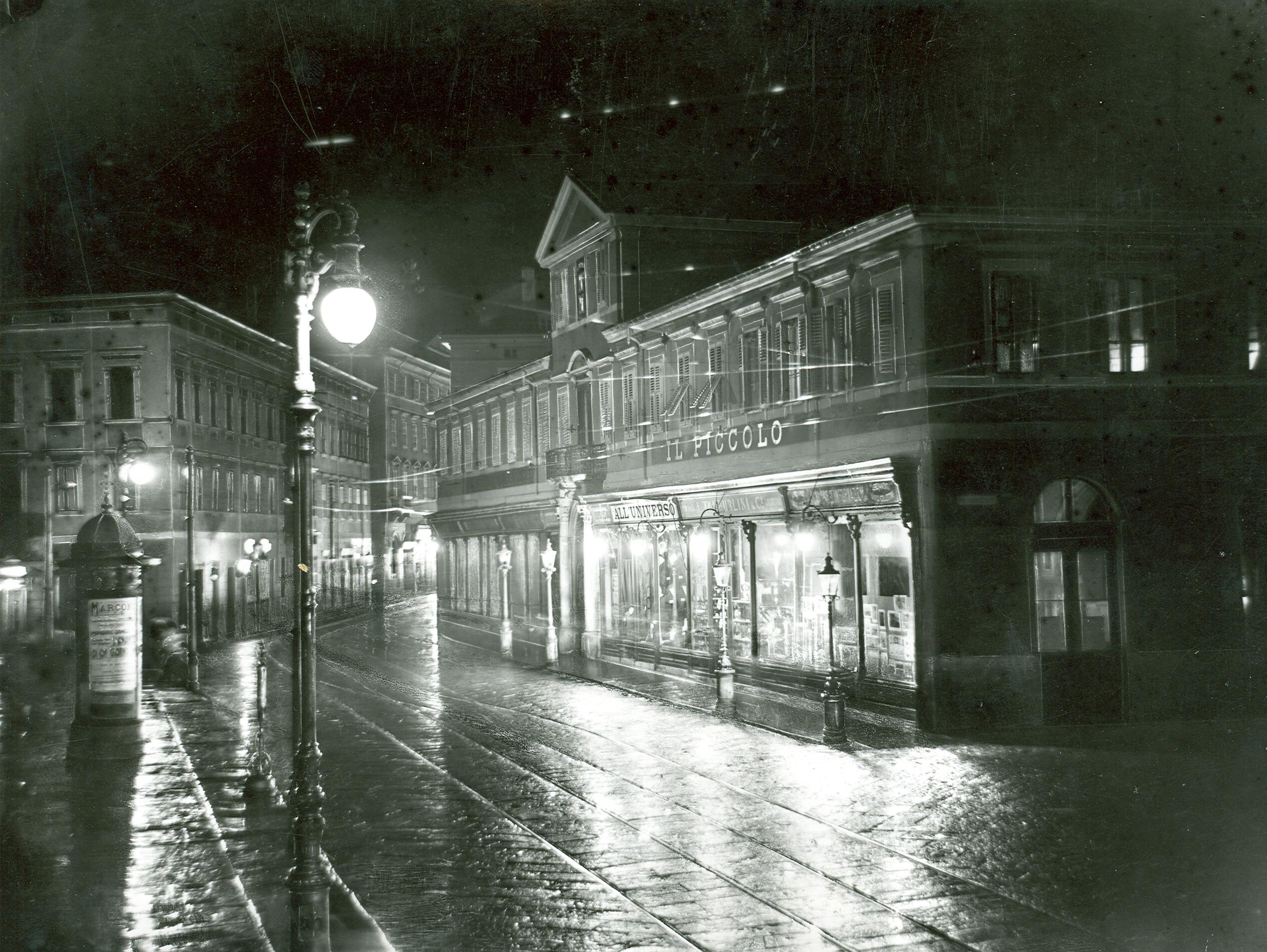 Joyce gave a number of lectures during his time in Trieste which provide insight into the development of his own thought and critical outlook. The first lecture, ‘Ireland, island of saints and sages’ was given on April 27, 1907 for the Università Popolare. Joyce was originally meant to give three lectures, but the other two, on the 19th Century Irish poet James Clarence Mangan and on the Irish Literary Renaissance were cancelled (though a partial copy of the Mangan lecture survives). In February, 1912, Joyce gave two more lectures for the Università Popolare on ‘Idealism and Realism in English Literature’ (Wlliam Blake and Daniel Defoe). 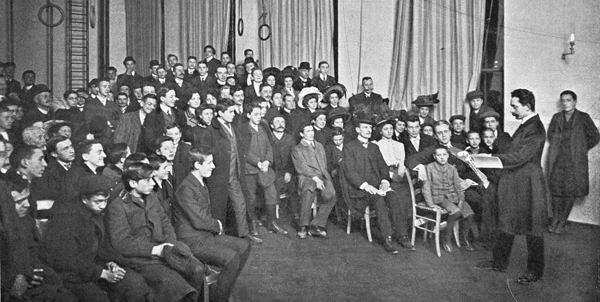 These lectures survive and provide considerable insight in to how Joyce viewed himself within the English tradition. Joyce’s final and most important lectures were a series of 10-12 lectures on Shakespeare’s ‘Hamlet’, given between November 1912 – February 1913 in the social hall of the Minerva Society . In his official request to the Police to present the lectures, Joyce described them as a ‘verbal commentary and critical and etymological analysis’ of Shakespeare’s play. Unfortunately, these lectures are no longer extant, but based upon the surviving notes we can see that Joyce read extensively and that his treatment also included a discussion of Elizabethan England and Shakespeare’s life and other works. Much of this material undoubtedly found its way into the ‘Scylla and Charybdis’ episode in Ulysses.

Joyce continued to maintain contact with Trieste and promote his own works in Italy long after he had left the Adriatic city. These contacts took various forms, from a keen interest in the translations of his works in Italian (as evidenced by his close collaboration with his chief Italian translator, Carlo Linati, and his supervision of Amalia Popper’s translations from ‘Dubliners’), to the promotion of his own works in the Italian press (Joyce even prompted Stanislaus to ‘get a par’ on Lucia Joyce’s ABC book in Il Piccolo and a brief mention did in fact appear in 1936). However, the most significant evidence of Joyce’s abiding interest and attachment to Trieste is to be found in Finnegans Wake, which includes numerous Italian and Triestine words and allusions. Indeed, one of Joyce’s last major creative efforts would be the translation of Anna Livia Plurabelle into Italian with Nino Frank in 1938 (Frank states in his memoirs that the translation was 75% Joyce’s). Less a translation than an original text, this version of Anna Livia Plurabelle demonstrates Joyce’s absolute mastery of Italian and in its wit and intimate knowledge of rhythms, timber, colour and allusion show just how much Joyce had assimilated – and retained – of his years in Trieste.